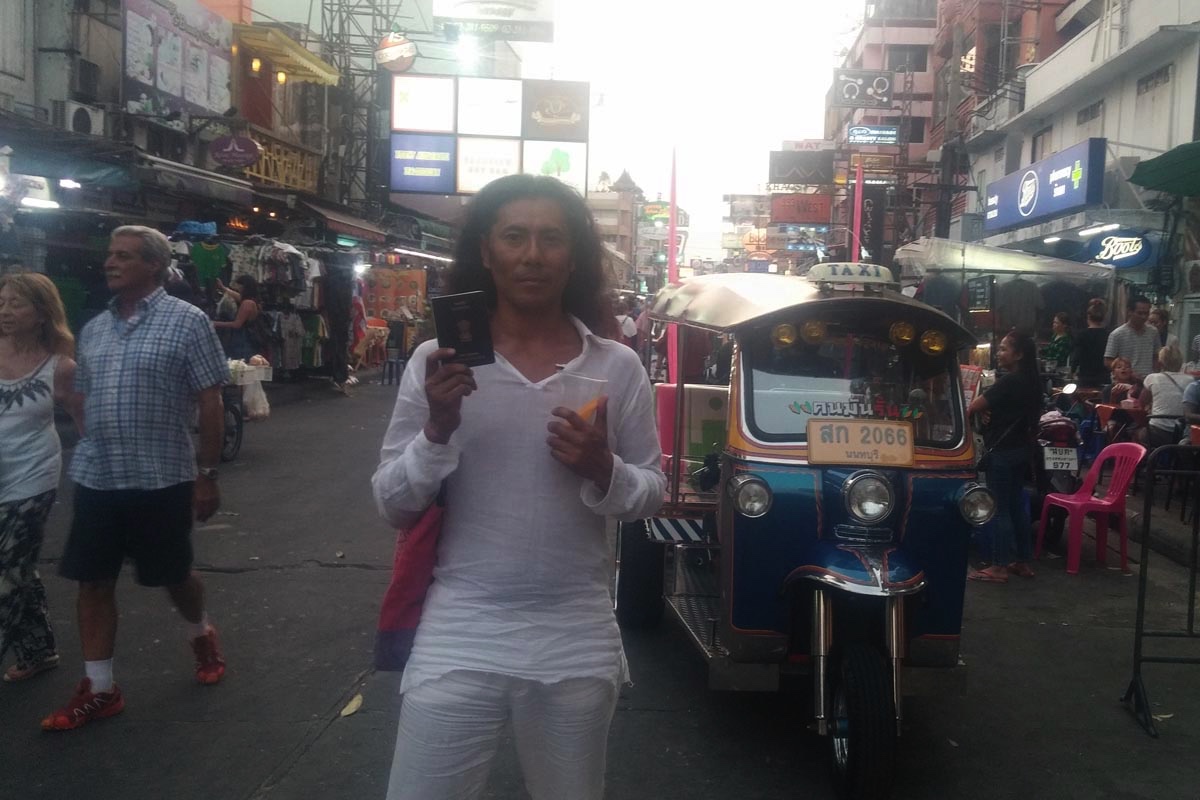 Lobsang Wangyal, 47, was not an Indian citizen until late last month. He was born and raised in a small village in East India, but he did not have the right to vote, to participate in politics or to hold an Indian passport.

“I could work and hold some property in India,” he said. “But that’s it.”

Wangyal’s parents escaped the Chinese occupation of Tibet in 1959 to seek refuge in India. He is a first generation Tibetan refugee who has been battling the Indian government to acquire an Indian passport for over 10 years, he said.

His struggle abruptly ended last month after he was awarded Indian citizenship. Wangyal is the first Tibetan in exile to have become an Indian citizen.

Wangyal, attributes his long tussle with the government to the lack of a specific legislation for refugees in India.

Although India is home to over 300,000 refugees, it is not a signatory to the United Nation’s Convention Relating to the Status of Refugees and has not enacted a law specifically protecting their rights. According to Saurabh Bhattacharjee, who authored ‘India Needs a Refugee Law’, a research article published in Economic and Political Weekly in 2008, the absence of a national law protecting refugees has led to the denial of their basic rights. He says that refugees in India are dependent on the benevolence of the state and have no rights against systemic violations against them. They are unable to hold property, travel freely in the country, hold government jobs, obtain driver’s licenses, operate large businesses or secure bank loans. Without a legal framework, they have no means to enforce their rights.

Bhattacharjee, a professor of Human Rights Law at the National University of Juridical Sciences in Kolkata, says that refugees and their children born in India are often treated like foreigners as opposed to citizens. He points out that the Foreigners Act of 1946 governs refugees, although the act does not explicitly define or mention them.

Although this applies to all refugees in India, Tibetan refugees have a particularly hard time acquiring citizenship. India is home to over 120,000 Tibetan refugees, most of whom fled to India after the Chinese People’s Liberation Army occupied Tibet and later brutally crushed a Tibetan uprising in 1959. Since then, Tibetans have continued a long and dangerous escape from Tibet to India. The numbers of Tibetan refugees fleeing to India significantly reduced after China clamped down on their movements in 2008. However, as the human rights violations in Tibet continue to increase, larger numbers of Tibetans are attempting to flee to India.

Although Tibetan refugees could be eligible for Indian citizenship if they were born in the country, they continue to be governed by the Foreigner’s Act and not the Citizenship Act of 1955. They are granted a stay permit after they obtain a Registration Certificate and are issued a travel document referred to as a ‘yellow card’ along with an identity certificate.

“The chances of getting a visa to travel abroad on a yellow book are very slim,” said Wangyal. “We need an exit permit to go out of the country for longer than two weeks. And what’s worse is that we need a return visa to come back to our own country.”

Wangyal, a photojournalist and web designer, says he has been unsuccessful on his many attempts to travel out of the country because of visa related issues and that is the main reason he is trying to secure a passport. It is slightly easier for Tibetan refugees from India to obtain student visas to travel abroad, but work visas are very hard to obtain on the yellow book according to a 2016 report by the Tibet Justice Center.

According to a 2014 study by the Tibet Justice Center, refugees are often deported to Tibet if they are caught without valid documentation, even if they were born in the country. The report identifies over 5 cases of deportation of refugees over 50 years of age to Tibet in 2013 alone. Most of the deported refugees are thrown in Chinese jails in Tibet and suffer a great deal according to the report.

However, Bhattacharjee is of the opinion that the Indian judiciary has attempted to level the playing field for children of refugees born in India. The Delhi High Court passed an order in August 2016 declaring that children of Tibetan refugees born in India between 1950 to 1987 are eligible to apply for an Indian passport. The order was based on the Citizenship Act of 1955, which stipulates that children born in India between 1950 and 1987 are Indian citizens irrespective of their national origin, and on the Indian Constitution, which grants fundamental rights to all residents of the country. Although the order has not been acknowledged by the legislature yet, two other High Courts have rendered similar judgments since 2014.

Wangyal said he finally believed it was time to send in his citizenship application in 2015. It was rejected without reason. He then sued and won a lawsuit in the Delhi High Court last year. Wangyal said that after he won the lawsuit, his passport application was accepted and his identity card was cancelled. Nevertheless, the application was eventually rejected on the grounds that he did not own property in India, something the High Court order does not require.

“All you need is proof of residence, not proof of ownership,” said Wangyal. “I asked the authorities to furnish the law which requires owning a house but they were unable to do so.”

Wangyal has also filed a contempt of court lawsuit against the concerned authorities and is seeking a judgment ordering his passport to be issued. Wangyal says he was in a bind and was unable to travel without a passport or a yellow card.

“I felt devoid of a basic human right,” he said.

With his brand new passport, Wangyal travelled to Thailand and left the country for the first time, this month.

Tibetan refugees in India also struggle to travel internally within the country without a passport. They require a stay permit to the region they want to travel to and have to get arrival and departure stamps from police officers from the region in their yellow book. Wangyal says that these decisions are arbitrary and a stay permit can be rejected without reason.

The Tibetan Rehabilitation Policy of 2014 was the first step by the Indian government towards a legal framework for refugees in India. The policy establishes certain guidelines extending land leases for Tibetans and their eligibility to benefit from central and state government programs. The policy permits them to pursue any job they are professionally qualified for. However, it does not lay down any guidelines in relation to citizenship or visa related issues for Tibetan refugees. The Policy is also not mandatory and its execution is entirely dependent on the decisions of the state governments.

Bhattacharjee believes that a possible reason the Government is not addressing the issue is that it relies on the Citizenship Act, the Foreigners Act and the Indian Constitution to protect Tibetan Refugees. However, he says that the ambiguity of the legal situation of refugees leads to conflicted decisions by the administrative authorities and the judiciary which often violate their human and fundamental rights. Bhattacharya believes that a national law encompassing all these concerns will help solve this problem. A specific refugee law will help reduce the ambiguity of the status of refugees in the country and will help grant them basic rights like right to a passport, driving license, government jobs and free travel.

Wangyal says that when Tibetans first came to India, it was deemed to be a temporary situation and they did not fight for citizenship then as they believed they would go back to Tibet.

“But it’s been 50 years now and nothing is changing,” he said. “We have to have a life. We need our fundamental rights.”