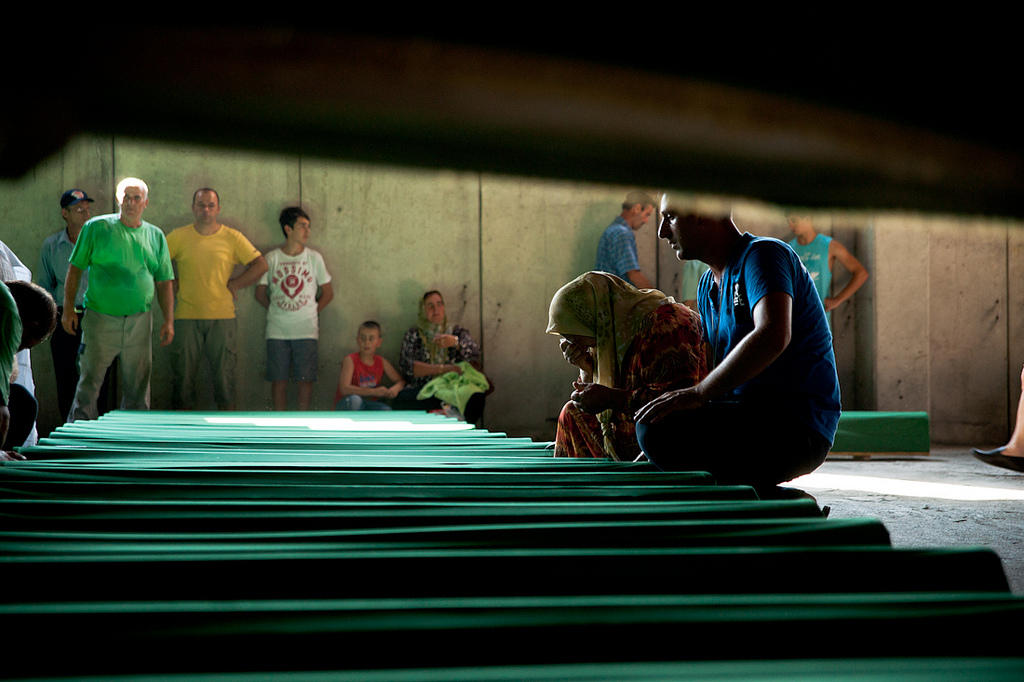 People gather at the Srebrenica Genocide Memorial in 2012 / Photo by Mikel Oibar is licensed by CC BY-NC-ND 2.0BY JOY Y. T. CHANG –

Muamer Lihic was once close enough to hear the sound of an incoming grenade just as it was about to explode; it was the sound of death.

“When a grenade is shot – you can hear it when they shoot it – the sound is faster than the grenade. If you can hear it poof– somewhere, you’re safe,” Lihic recalled, “if you hear the noise here [near you] but not the noise when it started, by the time you hear it, it’s going to hit near you.”

This was his everyday life in Sarajevo, the capital of now Bosnia and Herzegovina, or Bosnia, after the city was under horrific siege in 1992 in the Bosnian War. Almost 14,000 people died in the city during the fighting.

After the fall of the Soviet Union and the breakup of the former Yugoslavia, the three ethnic populations in Bosnia – Bosnian, Serb and Croat – were bitterly divided on whether to declare independence.

An independence referendum was passed in 1992 with the support of mostly Bosnians and Croats, but the Serb military decided to take over the land by force.

A bloodbath began and reports of ethnic cleansing and mass rape shocked the world. A Bosnian, Lihic was part of an ethnic group that was targeted during the war, and he knew the consequence of staying in a small town where Bosnians were vulnerable and no one would notice if anything happened. An estimated 100,000 were killed during the war and more than 2 million people displaced. Thousands of women were victims of mass rape and other violence.

So Lihic and his family walked from his small village, Rogatica, to Sarajevo one year after the city was besieged by the Bosnian Serb army in 1992. It was a 120-kilometer trip. They made it into the Sarajevo, Lihic said, through a tunnel under an airport.

Life in Sarajevo was not easy, either. Under the siege, resources were in short supply, and the walk to collect water could take up to two hours. Siren blasts were heard each day signaling a pending attack. Lihic said he would rush to the basement whenever he heard the sirens. Years later, sounds like those from of falling bombs still trigger nightmarish war memories.

“Here, I get anxious whenever I hear the sound of plane lowering [to land at the airports],” he said. He also did not enjoy the New Year fireworks as most New Yorkers do because it reminds him of the sounds of exploding of grenades.

In 1995, the siege came to an end after the UN requested North Atlantic Treaty Organization to intervene. It took two years and two major massacres for the international forces—led by the U.S.—to stop the Serb military. The siege lasted almost four years, and among the nearly 14,000 dead, more than 5,000 were civilians and 1,000 were children.

For the people of Bosnia, the cease fire was followed by years of migrating and relocating. But Lihic quickly found that his hometown was not the place for him. Ethnic tensions remained, and the Bosnians, he said, were discriminated against in a town that was now predominantly Serb.

“I knew there’s no future for me in Bosnia,” he said.

Unable to afford to move to the Bosnian side of the country where rents were high and living expenses soared, Lihic applied for refugee status through the resettlement program of the International Catholic Migration Commission. His application was approved one year after.

Along with his mother and brother, Lihic once again left his home for a safer future, but this time, for good. They were part of the pool of 2.7 million refugees and internally displaced Bosnians during the war, according to the United Nations Refugee Agency.

In 2001, he stepped on the soil of the United States for the first time and has stayed here since.

This will be his 19th year in the U.S., but memories of the war still linger. Lihic said that when such a traumatic event happened to his life, he was forever changed. Tens of thousands other Bosnians share these memories.

“Imagine half of your family died – somebody killed them – and you don’t know why, and you’re lucky that you escaped all of that and you’re sitting here having this conversation. Wouldn’t that be in your mind constantly?” he asked rhetorically.

The wound is still left untreated, and it is made worse by local politicians in Bosnia who have refused to acknowledge that genocide had occurred during the war. Mladen Grujicic, the mayor of Srebrenica, was one of them. He once publicly stated that there had not been enough evidence to prove that the killings took place in the city in 1995 was a genocide.

Such denial showed some politicians’ unwillingness to handle transitional justice. Still, after 27 years, the government hasn’t completed an investigation of the crimes committed during the war. A war crimes tribunal in the Hague convicted Bosnian Serb commander Radko Mladic of extermination of civilians in Srebrenica, and other high level political and military figures have been prosecuted. But an estimated 10,000 other participants in ethnic cleansing have not been brought to court.

To some victims and witnesses, justice has not been achieved, and even everyday life reminded them of the war.

“Imagine you’re walking on the streets and you see someone who did something bad to you during the war; they’re still living in the same neighborhood,” said Lihic, referring to survivors who stayed in Bosnia.

Jelena Subotic, political science professor at Georgia State University, said a more powerful central government can push for the prosecution of war crimes at all levels.

“The political division makes almost everything difficult, unless there’s a constitutional change in Bosnia – or it’s really difficult to see how anything can be done,” said Subotic.

Political leaders in Croatia and the neighboring Republic of Serbia offered official apologies for the genocide, but none has ever come from the Republika Srpska.

For survivors like Lihic, the apologies serve as an acknowledgement of the tragedy. But he emphasized that though he considers himself lucky to have survived, he is not in the position to talk about forgiveness.

“I have moved on, but I can only speak for myself. For people who went through worse – killings and rapes – can you really heal?”

JOY Y. T. CHANG is from Taipei, Taiwan. A multimedia journalist based in New York and a M.S. candidate at Columbia Journalism School, she covers cross-strait relations and transitional justice. Twitter: @joytiunnchen